The perfect blend of mobility and simplicity, the Thuraya SatSleeve is the smartest, fastest and simplest way to transform your phone into a satellite smartphone. Thuraya SatSleeve provides access to phone calls, emails, instant messages and popular social media apps in satellite mode across 160 countries within Thuraya’s coverage network.The SatSleeve for Android comes with an adaptor for Samsung Galaxy S4 inside the package. Adaptors for Samsung Galaxy S3 are available separately.

Email on the go
Send and receive emails in satellite mode, no matter where you are.

Take your favorite Apps with you
Access your favorite apps such as Facebook, WhatsApp, Twitter and many more, via satellite mode so that you can surf, chat and update your profile in places that are beyond terrestrial network reach.

Compatibility with your smartphone
Add a reliable satellite connection to your Samsung Galaxy, wherever you go. The SatSleeve App is available as a free download from Google Play.

User-friendliness
Simply dock your smartphone into the SatSleeve to enjoy satellite connectivity. Available in 12 languages, the user-friendly SatSleeve App allows you to easily integrate your smartphone’s address book with the swipe of your fingertips.

Enhanced safety features
Thuraya SatSleeve comes equipped with an Emergency Call button - you can make a phone call to one predefined number even without your smartphone docked. 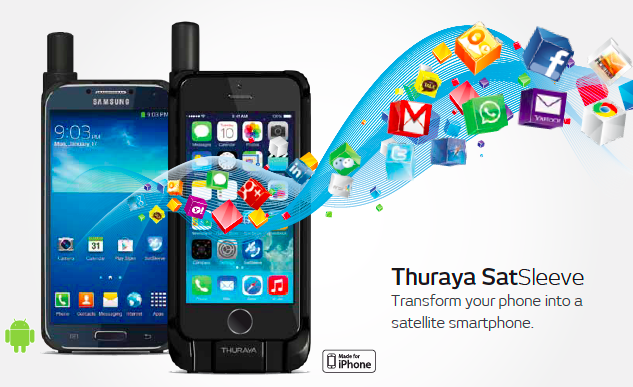 
1.Which iPhone models can be used with the Thuraya SatSleeve?

2.What network does the SatSleeve run on?

3.What are the dimensions and weight of the SatSleeve?

4.What is included in the SatSleeve package?

The package contains the SatSleeve’s main unit, the adapter to dock the iPhone, a battery, travel charger (with four adapters for EU, UK, CN/JP, AUS), USB cable, user manual in 14 languages and a warranty card.

5.Does the SatSleeve have its own microphone and speaker?

Yes, the SatSleeve has its own microphone and speaker.

6.How long does the battery last?

7.How long does it take to charge the SatSleeve?

It takes approximately 2 hours and 30 minutes to charge an empty SatSleeve.

8.How to know when the battery of the SatSleeve is fully charged without having the iPhone App open?

The LED on the SatSleeve will turn from red to blue.

9.After switching the battery charging switch repeatedly, the SatSleeve’s battery went from 3 bars to 1 bar. Why is that?

The SatSleeve App can be downloaded for free from Apple iTunes.

11.Which languages does the App support?

12.How do I change the language of the SatSleeve App?

13.Which services can I use in satellite mode?

With the SatSleeve you can use your iPhone to make and receive calls as well as send and receive text messages satellite mode.

14.What is an Info Message?

An Info Message or Cell Broadcast is a network service that provides certain types of information via SMS in a specific region. Please note that this service is currently not available in the Thuraya network.

15.I’m connected to the Thuraya network but the GPS icon in the status bar keeps on flashing. What does it mean?

16.How can I receive calls when the iPhone is not docked and paired?

17.How can I receive incoming calls when the iPhone is docked and paired but the App is not open?

The main unit of the SatSleeve will have a vibration alert to indicate incoming calls. All you have to do is open the App and then accept the call.

18.What happens if I am on a satellite call and there is an incoming GSM call?

When this happens, your satellite call will be disconnected.

19.Do I have to pair the SatSleeve with the iPhone every time I switch them on?

Normally the units have only to be paired one time, then the units will pair automatically the next time.

20.Can I connect multiple iPhones to the SatSleeve in parallel?

No, only one unit can be paired.